In 2016, Cracks In The Ice reached the Quarterfinals of the prestigious Academy Nicholl Fellowships in Screenwriting, run by the Academy of Motion Picture Arts and Sciences, which stages the Oscars.

It also won the Best Screenplay Award at the International Film Festival Ireland 2011. Inspired by actual events, it’s a gritty drama about a New York journalist who risks his life to expose links between blood diamonds, Al Qaeda and the 9/11 attacks. 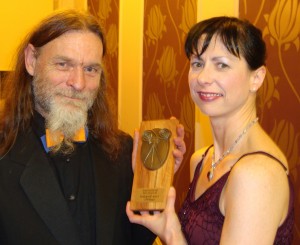 “The script centres on a Shakespearean-type tragic hero who’s the architect of his own downfall. It’s a gut-wrenching drama which takes the journalist to the limits of his humanity. I’m very proud of the script and I’m delighted with this recognition.” – Fiona Ashe, screenwriter of Cracks In The Ice.

Endorsements of Cracks In The Ice:

“The crafting of the script was well above average. The dialogue was consistently very good. There was an intelligence in the script that felt commanding. There was also real meaning in the script. Obviously, the script is dealing with humanitarian and political issues. But it also got into a personal struggle in a way that was affecting.” – Reader’s Comments, Academy Nicholl Fellowships in Screenwriting.

“I could not put this script down. A real page turner – so lean and full of surprises! It is magnificent!” – Heidi Sullivan, Moondance International Feature Screenplay Winner.

“Such a powerful and disturbing story. So brutal, heartless and upsetting.  But a great story and one certainly worth telling.” – Mark W. Travis, author of The Film Director’s Bag of Tricks.

“It’s really powerful! Well researched too. Jango is a particularly good character. When he’s offscreen, I want him back on again. The US political connections are nicely slipped in. Action sequences are good, working well.”  – Guy Meredith, writer of Heartbeat and The Bill.

“One of the best scripts I’ve ever read” – David Gleeson, writer/director, The Front Line.

“Fiona humanised and polarised events that were just another news story, making a personal connection to the awful reality of the individual lives caught up in the horrendous atrocities.” – Will Nugent, director of the International Film Festival Ireland.

I would be delighted to hear from producers / financiers who’d like to collaborate on this film with me.  You can contact me by clicking here.