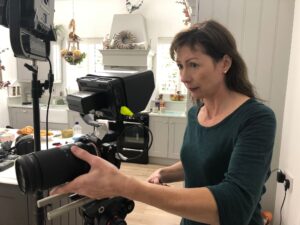 “While working as a foreign news journalist, I discovered lots of stories which fascinated me. I now create thrillers and dramas about social injustice which I hope will inspire social change. With these meaningful films I aim to bring awareness to important global issues to generate discussion and action. I also love making films in other genres: Film Noir and musicals, in particular. I have a slate of feature films and TV drama series in development — please contact me if you are interested in a potential collaboration on these projects or if you’d like to me to collaborate on one of yours.” — Fiona Ashe, Director/Screenwriter.

Fiona Ashe is an Irish award-winning film/television director and screenwriter, whose work is endorsed by many renowned filmmakers, including Jim Sheridan (‘My Left Foot’), Mark W. Travis (author of The Film Director’s Bag of Tricks) and Bruce A. Block (‘What Women Want’).

Her debut feature screenplay ‘Cracks in the Ice’, which is inspired by true events, tells the story of a New York journalist who discovers that blood diamonds from Sierra Leone are being used to fund the 9/11 attacks. In 2016 with this script, Fiona advanced to the Quarterfinals of the prestigious Academy Nicholl Fellowships in Screenwriting, run by the Academy of Motion Picture Arts and Sciences, which stages the Oscars.

Fiona holds a Diploma in Advanced Film Directing from the New York Film Academy. While in NYC, Fiona directed a 16mm short film, Shades of Gray. It won the Best Film Noir Award at the New York International Independent Film and Video Festival 2003 and was described by Oscar-nominated filmmaker Jim Sheridan as “very well directed”.

Her film, ‘Rapunzel — The Blonde Years’, was commissioned by Screen Ireland and is a viral hit on the Screen Ireland’s Virtual Cinema YouTube channel.

Fiona is a graduate of the six-month ProSeries Professional Screenwriting Program (LA). She has also studied screenwriting under the tuition of Robert Towne (‘Chinatown’) and Paul Schrader (‘Taxi Driver’) as well as studying visual structure taught by Bruce A. Block (co-producer, ‘What Women Want’).

Fiona completed Script Editing training with the Script Factory (UK) and the BBC.  She was a Script Reader for Northern Ireland Screen from 2013 to 2014.

Fiona was selected for the first ever Berlinale Talent Campus in February 2003 — a winter film academy which brought 500 filmmakers from 61 countries together on the fringes of the prestigious Berlin Film Festival. It included directors’ masterclasses taught by Wim Wenders, Anthony Minghella, Mike Figgis, Stephen Frears and Spike Lee.

Fiona has worked as a news producer with TV3 and Today FM (independent Irish broadcasters). This experience informs her political thrillers about social injustice.

Fiona is a member of the:

Fiona welcomes approaches from producers seeking to option her scripts. She is also available for writing assignments and directing work worldwide: click here to contact her.